"Market Manipulation" Theme (1): The concept of the theme is risky, and it is easy to get stuck

Some individual investors who participate in stock trading have a common trouble: after buying a stock that is going up well, the stock price always falls, and every time I receive the last blow, why is it always me that gets hurt? Judging from some illegal cases, it is very likely that due to the lack of analysis and research on the fundamentals of stocks, only trading according to the graphical trend and feeling, and accidentally buying stocks that the illegal subject deliberately created the false appearance of rising, suffered hardships Stuck at high stock prices. Let's illustrate with an example:

From February 12 to March 23, 2015, in just 23 trading days, the C shares of the GEM rose by 55.1%, while the GEM index rose by 20.93% during the same period, with a deviation of 34.17%. In less than a month, the income is more than 30%, and the profit-making effect of the stock market comes really fast. What's driving the stock's outperformance, and what's the story behind the scenes?

The fundamentals of the stock have not changed significantly

Judging from the announcements issued during the 23 trading days, there are two positive announcements for C shares: the first is that on February 28, 2015, the company released the 2014 performance report, and the net profit increased by 176.74%, but the absolute value was only 60 million , and the average net profit of listed companies on the GEM in 2014 was 94 million yuan; the second was the 2014 profit transfer announcement issued on March 18, 2015, the actual controller proposed to distribute cash to all shareholders for every 10 shares 0.8 yuan According to statistics, there are more than 90 companies on the ChiNext board that plan to convert 10 shares to 10 shares, and many of them are companies that convert 10 shares to 20 shares and 15 shares. From the horizontal analysis and comparison of listed companies, the two announcements are inconspicuous.

In fact, C stock has risen sharply long before the above-mentioned announcement, as can be seen from the headlines of many eye-catching media reports: "Internet Finance Concept has risen again C for three consecutive daily limit" (February 12, 2015), "Internet Concept Stocks have been repeatedly speculated by institutions and staged a fierce long-short showdown” (February 16, 2015).

Violators were punished to reveal the reasons for the surge

The positive fundamentals of C stock are not outstanding. Is it sought after by the market just based on its concept? Is the rise in stock prices due to investors' value mining, or because of the instigation and fueling of illegal entities?

In March 2017, the "Decision on Administrative Penalty" publicly released by the China Securities Regulatory Commission revealed the reasons for the sharp rise in C's stock price. It turned out that the illegal subjects who held huge amounts of money, together with their relatives and friends, used multiple accounts to manipulate the stock price, constantly pushing up the stock price of C, and selling the stock at the high level, making a profit of up to 200 million yuan. The methods used by relevant illegal entities to manipulate stock prices include:

1. Use the controlled account to conduct reverse and reverse transactions to inflate the trading volume;

2. After the declaration, a large proportion of the orders are withdrawn, and false entrustment is carried out;

3. Pull up the stock price, create a hype atmosphere, attract investors to chase the price, and then sell to make a profit.

Taking March 23, 2015 as an example, the relevant accounts took advantage of their capital to create a trend of rising stock prices at the opening, attracting other investors to follow suit. The stock immediately closed the price limit shortly after the opening, but the violators sold all of them. Hold the stock, and leave the market with a cool profit. The stock price movements and manipulations on the day are shown in the chart below: 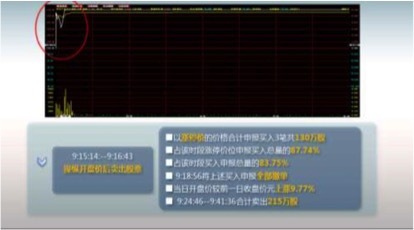 The Securities Law clearly stipulates that it is prohibited to use capital advantages, shareholding advantages or information advantages to jointly or continuously buy and sell to manipulate securities transaction prices or securities transaction volumes. This case tells us that in the process of participating in securities trading, investors must strictly abide by relevant regulations such as securities laws and regulations and exchange trading rules, so as to avoid the impact of trading behavior on the price and volume of securities. The legal network is extensive, and there is no omission. Securities supervision and law enforcement agencies have always maintained a high pressure on violations of laws and regulations. If they deliberately manipulate stock prices, they will be severely punished according to law. In addition to confiscation of 200 million yuan of illegal income, the illegal subjects in the case will also be confiscated. A fine of up to 600 million yuan was imposed.

On the other hand, if there is a lack of independent and in-depth thinking about the fundamentals of the stock, buying stocks based on the concept of the theme or a sudden rise is very likely to become a victim of market manipulation by illegal entities. Investors should carefully identify, think deeply, and make prudent decisions in stock trading, and avoid becoming a pick-up man who stands guard at high stock prices.