It can be seen that there is no shortage of big data in the radio and television industry, the key lies in how to apply these big data! Tongzhou and Guiguang Network have made the best comment on this issue on the road of practical application of radio and television big data.

As of November 2019 , the Big Data System of Guiguang Network has collected more than 3.1 million set-top boxes, generating more than 1.5 billion pieces of raw data every day. Through data cleaning, an average of about 40 million complete playback records are generated every day.

In 2019 , after realizing the data collection of all two-way set-top boxes, Guiguang Network began to build a data analysis platform. Through the analysis of the collected data, it realized the ranking analysis of live broadcast ratings, timely relocation of on-demand broadcasts, user loss early warning, and network traffic monitoring early warning. , special area page order rate, end-user behavior event analysis and other functions, in addition, based on the analysis results of the big data system, it is connected to the SMP network management, which realizes the statistics and early warning of user-on-demand error codes, and the extraction of user bills, helping operation and maintenance personnel to quickly locate faults. At the same time, the big data platform of Guiguang Network provides data to third-party business systems such as recommendation systems and advertising systems to realize new services such as intelligent recommendation, precise advertising, and personalized portals to improve user experience.

Next, we will show you how Tongzhou takes three steps and joins hands with Guiguang Network to practice and apply big data of radio and television!

1. Driven by technology, build the overall architecture of the big data platform

The key technologies of big data cover various technologies from data storage, processing, and application. According to the processing process of big data, it can be divided into data collection, data preprocessing, data storage, data analysis and mining, data application and other links. Therefore, in terms of platform architecture, the main architecture of Guiguang Network's big data platform is data collection layer, application layer and display layer.

The data acquisition layer mainly obtains the data required by the subsystem through various methods (including system interfaces, monitoring equipment, monitoring modules, set-top boxes, etc.), and provides a general data access interface through interface adaptation to realize operations such as data access , shielding the impact of data heterogeneity on the platform. At the same time, it realizes the objectification of data, and provides object-oriented data access for upper-layer software modules.

The system display layer provides a variety of presentation methods such as lists, charts, and graphs, which are convenient for users to intuitively understand and manage services and monitor current performance. At the same time, the system supports comprehensive statistical analysis of set-top boxes, performance data and other information, helping users to quickly and intuitively understand the operation of platform services.

2. Application function-oriented, so as to accurately perceive user needs 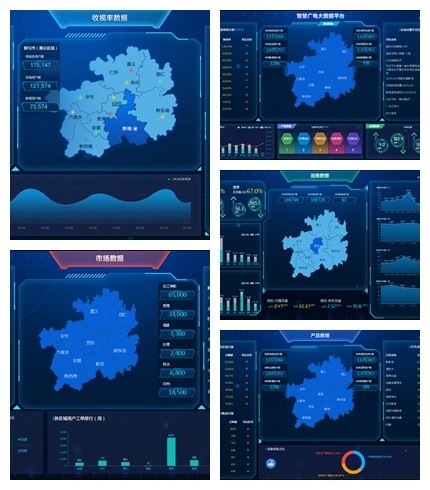 When building the Guiguang network big data platform, Tongzhou takes the application function as the basis, fully mines the media content data and analyzes the user data, so as to accurately perceive the user's needs, and convert it into a collection and production that can be widely used in radio and television content. , program recommendation and management, user tracking and service, public opinion monitoring and management, program transmission and distribution, and data output in the fields of program monitoring and supervision.

The main functions include:

1 ) Offline data acquisition function. The data of HD interactive platform, IP video platform and OTT platform are collected regularly through offline FTP , and the on-demand and live broadcast data of users on the existing network are collected. After cleaning, they are stored in the offline database.

2 ) Online data acquisition function. Through the terminal set-top box acquisition probe module, the nginx load address is reported online in real time, and after analysis and cleaning by the online acquisition module, it is stored in the online database.

1 ) User trend analysis function. Collect the daily activity of all interactive users on the entire network through offline data, analyze recent new users and online user data based on regional information, and present it in reports for operational analysis.

2 ) User churn warning function. In the case of information collection based on big data, use user playback behavior data, payment behavior data, and use machine learning methods to infer user data that may be lost after a period of time, provide data support for system operation, retain users, and improve work efficiency.

5 ) Multicast switching list function. For IP platform users, it also collects the multicast switching status of users during the live broadcast process, and outputs reports to analyze the network status information in the end user area.

9) Data acquisition and data output function. According to the output specifications of the big data system, data can be output through online interfaces, offline FTP and other methods according to the needs of third parties for use by third-party systems.

Based on user behavior analysis based on data collection, each specific information of the user is abstracted into tags, and these tags are used to concretize the user image, establish a user portrait function, and provide differentiated services for specific user groups.

Intelligent recommendation to improve user ARPU value. There are more and more channels for video acquisition, basically allowing users to get it at any time, anywhere, and on any device with a screen. Video distribution is becoming more and more intelligent, allowing users to get the content they want to watch in the easiest way. Video intelligent recommendation has become the standard for all video service operators. how to make digital tv

Users get the best video viewing experience. In addition to pushing higher-definition video program sources that cannot be achieved by other channels, we also need to perceive users' viewing habits, actively recommend to users the programs they are most likely to watch, and allow users to Roaming between several entertainment screens in the home. In the end, users stay in the radio and television network, improve the utilization rate of radio and television video resources and increase the user's ARPU value.

Cluster analysis, trajectory analysis to retain customers. Big data analysis can use cluster analysis to understand the types of programs and channels that each customer likes to watch on a daily basis, as well as the likely purchase degree of the latest blockbuster movies, so that the account manager can pick out the top 20% of users who are most likely to buy products. Take door-to-door visits or telephone promotions to quickly and effectively conclude transactions.

Effectively handle failures. The user terminal uploads its status data, management and control information and other data through the two-way network. The terminal management system uses the two-way protocol to perform power-on management, authentication and authentication, parameter reading and writing, log reporting, upgrade management, and fault diagnosis for the terminal equipment. On the basis of management operations, it realizes the visual management of user terminals, the display of terminal operation status, the controllability of terminals, and the remote diagnosis of faults. The terminal management system can provide information on the current system network and business operation status in various granularities with customized reports, provide system managers with an understanding of the current network operation status, provide a basis for high-level system decision-making, and improve radio and television operators. Service quality and management efficiency.

Operation and maintenance trend forecast. At present, most radio and television network operators use post-event maintenance in handling user faults. That is, when users have problems watching TV and make a phone call to report the fault, the operator will send someone to deal with it, and the operation and maintenance work is very passive. 1) Big data technology can collect and analyze the status of users in real time, respond in time when an alarm occurs on the user terminal network or user terminal, solve the problem before the user fault report, and improve the user experience. 2) During the operation of the management system, enough data will be accumulated to form the running state curve of the entire network, and the management system will calculate the running trend data of the network according to a certain algorithm. When the system detects that the current network operating state deviates from the trend curve, the system sends out an early warning message, which is convenient for operation and maintenance personnel to detect and adjust the network in time, and solve the problem in a state that has not yet occurred in a large area. 3) In the maintenance of VIP customers, record the terminal usage habits of VIP customers, such as the weekly switching frequency, channel switching times, application switching times and other data, and analyze the viewing preferences of each customer. When the relative difference between the actual situation and the historical record exceeds a certain threshold, the system issues an alarm.